What if that first hop doesn’t allow you to background tunnel through it? Either because SSH key authentication isn’t enabled, or because it uses a 2FA solution that requires manual interaction?

Thanks to colleague Dan Patterson, I’ve got steps that work out almost as quickly/simply as I had before.

The PuTTY Session “Host Name” and “Port” are to the server I have to reach in order to then reach the other desired destinations. The server that requires password authentication and/or manual 2FA interaction. I’ll call this the “jump host”. 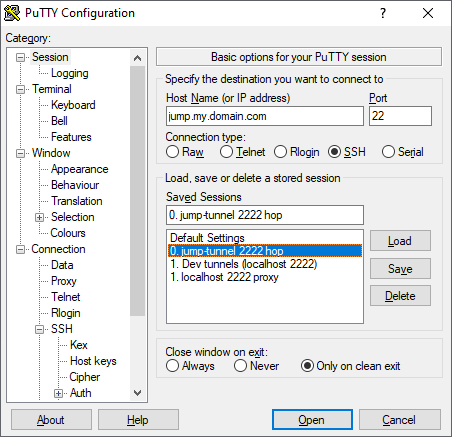 Then, in the Connection > SSH > Tunnels configuration, I’m going to tunnel local 2222 to the SSH port (normally 22) on a host in a network on the other side of the jump host. Let’s call that the “protected network”, and the “tunnel host”. 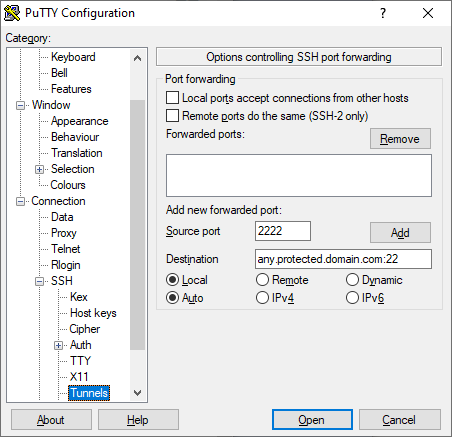 Under Connection, I’m also setting a “keepalive” on this PuTTY session so that it will stay open even though I won’t be interacting with it. 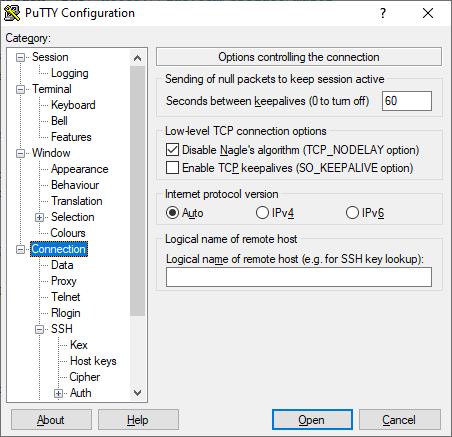 Login (to the jump host), fullfill the 2FA requirements, put the window somewhere you won’t close it. (I also gave it a unique size and font color to remind myself that it’s special.)

PuTTY Session for dynamic/on-the-fly to the protected network

Now we can use the above connection to tunnel, in one step, to another host in the protected network (technically, anything reachable from that tunnel host, including perhaps other hosts that only it can reach, like via a VPN).

I’ve created another PuTTY Session for this, with no hostname specified, so that I can type in any host dynamically when I open it. 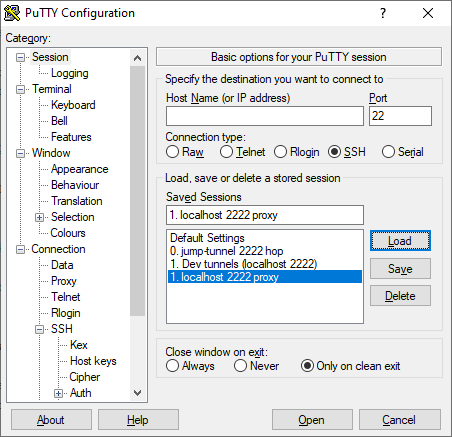 I’ve named the Session “localhost 2222 proxy” to let me know that I’m going to be connecting through the above tunnel. 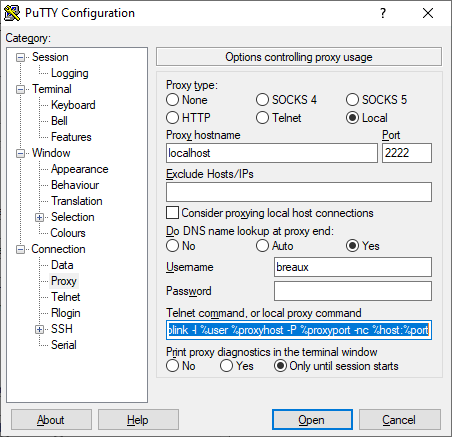 The small addition needed to the prior plink command was the -P one for the custom port:

Authentication to the Tunnel/Proxy host

You have to specify how to authenticate to your tunnel host when proxying through it. Either:

I also discovered, BTW, that if you have just one user ID you use on every system, and if you specify that user ID in the special PuTTY “Default Settings” session’s Connection > Data > Auto-login username field, this automatically supplies your user name in place of having to add the plink ... -l option at all.

This fact has thrown me off a number of times when something works for me but not for a colleague who hasn’t set up her Default Settings that way.

Single Session with many tunneled ports

Finally, my “big” PuTTY session which automatically sets up many different tunneled ports for me, including database server ports and the super-useful dynamic port that I can use as a browser SOCKS proxy.

I used a hardcoded destination in the protected network, but that’s not required. 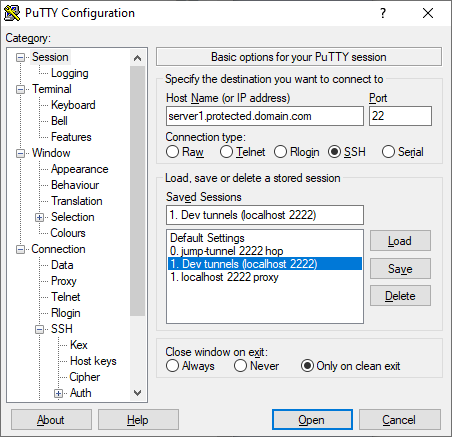 Same proxy setup as above, just this time we’re also going to store several tunnels to ports which are on different servers only accessible from the protected network. 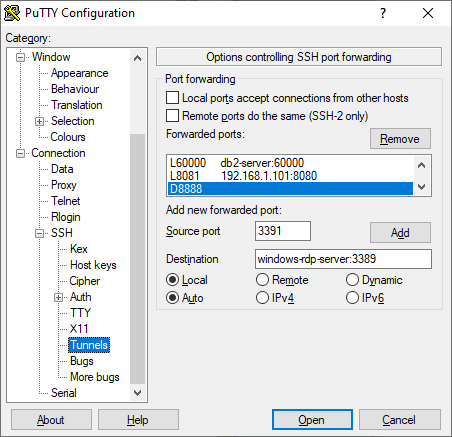 NOTE you could run the dynamic tunnel - my 8888 - up in the initial “Jump” connection instead. If you only need SOCKS connectivity to things the jump host can reach. As opposed to things the tunnel host can also reach.