I’ve recently been trying to get my secondary machine, a Mac, running Rational Application Developer at least close to how I have it running on my primary Windows machine. (While awaiting hardware fixes and system reload.)

Several things have not worked out-of-the-box, so I figured I ought to document the things I’ve had to address.

First, I already had RAD 9.6 installed and had used it a bit, so I know it was working. It also installs a copy of IBM Installation Manager, which is how you ought to be able to update to a new fix level. I knew 9.6.1 was available, so I tried the “IBM Installation Manager” option from within RAD, from the “Help” menu, but it never worked. I don’t remember the exact behavior or error, but I think at one point the application just never appeared, and maybe at another it reported a generic, “An error has occurred… see the log file”.

Nor did running the program directly, once I located it under /Applications/IBM/InstallationManager/eclipse/IBMIM.app. I think initially it just failed to find any packages to install or update.

I then tried deleting IM, which under a Mac is not as intuitive to me as Windows, believe it or not. (And, apparently, simply sending those folders - InstallationManager and IMShared - to the Trash is insufficient for a full uninstall. I’ll return to that in a moment.)

I then tried installing a new, standalone version of IM, but that found no packages either.

So… I concluded I needed to uninstall everything and start from scratch with 9.6.1. However, when running that installer, the IM installation portion complains that a newer version is still installed.

@PeteKidwell (hopefully the same one) gave me the tip that I needed to delete the entire /var/ibm/InstallationManager folder (as root/sudo, of course). This did allow the reinstall to succeed.

Now, attempting to run RAD right after installation resulted in the confusing error, “To open “Eclipse” you need to install the legacy Java SE 6 runtime”. 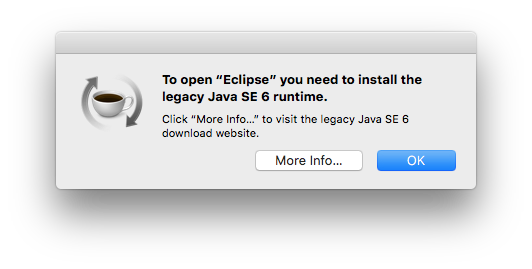 Are you kidding me? An up-to-date version of a Java IDE surely isn’t requiring an obsolete Java? Plus RAD provides its own version - Java 8 - I can see it right there in its installation directory. Plus 9.6 was running fine.

Web searches seem to indicate this is Mac message rather than an Eclipse or RAD one, which makes sense given that it’s not even trying to use RAD’s copy of Java yet.

StackOverflow had various suggestions, but I don’t want to install Java 6. I tried uinstalling and reinstalling the Java 8 SDK. In the end, the one that worked for me from there was to edit the info.plist file. No idea why or how that works, but it does.

(I also opened a Question on DeveloperWorks Answers, hoping for a better/official fix to this, but no replies thus far.)

By the way, even after the full reinstall, I still can’t run “IBM Installation Manager” from inside RAD. Same, “An error has occurred… see the log file” message.

But now the direct execution of InstallationManager does work, and can Update/Modify RAD.

For anyone possibly searching for the error, some of the log message is:

I think I’ll stop there.

I’ll do at least one more post, but the topics in it are really unrelated to these…